Okay, well I don’t actually know who Edyta Sliwnska is. I could look her up, but honestly it’s almost 11pm where I am and I don’t really care. What I do care about, well – there’s actually two somethings. And they are very prominent in these pics. Not because she is well-endowed or buxom or large of breast. But because she is dressed like a slut. Yep, let’s face it Edyta whoever you are – and I’m not just trying to be a jerk, dear – but the way you’re dressed is only fit for a) bedtime, or b) slutty public display. Congrats, you’ve made it to BralessBlog 🙂

Instead of pulling a wikipedia stunt and trying to figure out who she is and why she’s famous, I’m just gonna make something up, okay? She is Kathleen Turner’s daughter and starred in a remake of the famous movie Body Heat. She’s in Body Heat II with Michael Douglas, who in between geriatric ocular correction surgery and sexual addition therapy decided to hook up with little Ms small boobies in this new role. 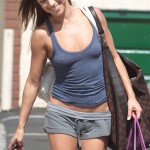 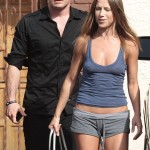 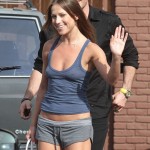