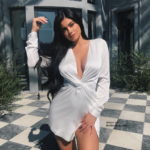 Kylie Jenner was credited recently with wiping out around $1 billion from Snapchat’s market value. Apparently she wasn’t happy with a recent update, and said she isn’t gonna use it anymore.

Do you guys think that folks at companies like Snapchat or Instagram care about Kylie’s boobs? Ya better bet they do. Cause we care about her boobs, and they are very interested in what we care about. 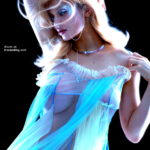 Honestly, I don’t keep up with the Kardashians. I knew Kylie was somehow peripherally related, same kind of curvy Armenian body and all, but who knows who is related to who. But since she popped up in the news, and I drooled over her boobies a bit, I figured why not explore her a little deeper. 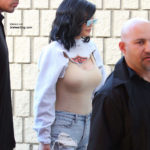 I know you are going to be astounded but: I can’t decide if she has fake ones. General consensus is yes, they are enhanced. But seriously, all those Kardashian girls are always popping up in sextapes and playboys and who knows where, and ain’t nobody got time to keep their breastacles straight. Regardless, Kylie has a great pair – a great BIG pair. And she certainly doesn’t mind bouncing them around braless. 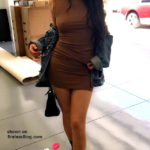 As you may have already noticed in that second photo above, Kylie doesn’t just have nice bazonkers, she also has great nipples. There are more than a few shots of her running around with fabulous pokies. Clearly she also has pierced nipples, which tend to keep those things hardened up and ready for the camera 24/7. They are just the right size, and thank goodness they are three-dimensional. Nobody wants flat nipples, and hers poke right out, thank tha heavens.

I think Kylie is only 20 years old these days, but there is ample opportunity for those girlz to get droopy considering she already got pregnant and recently had her first child. I won’t tell you what she named her kid, cause it’s stupid, but I will fervently hope that there’s some breastfeeding going on.

In 2017, she was named on some kind of richkid Forbes list because she made $41 million dollars. Yeah, you read that right! I think part of that was modeling, but a bunch of it was cosmetics. I saw a photo of her doing the walk of shame up a street in LA one mid-morning, but she happened to be clomping in those heels back to her spotless black Ferrari. Dang, that’s nutso. 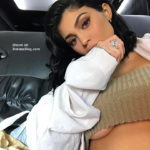 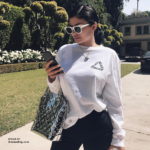 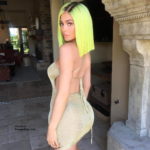 If you’re really lucky, and you hang around BralessBlog long enough, you’ll find a couple of yummy photos of Kylie doing the sideboob thing. And why not? If you had hundreds of millions of dollars, and boobs that were big and just starting to go saggy in your 20-year old body, you’d flash a little too. 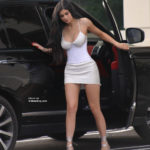 With someone as used to the limelight as Kylie, and so carefully cultivated for the media frenzy of America, it’s hard to find *true* candids. You know, where we can peek down her blouse or check out her nipples on those mornings when she’s not yet awake, going for coffee, and kinda forgot her bra. But we can dream, and I can search, and show you all the goodies that I do find! 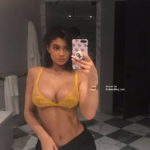 This entry was posted in Braless Celebrities, Sideboob. Bookmark the permalink.