We can always depend on designers to put scantily clad women on their catwalks to model the latest fashions. And the way the little divas walk/stomp tends to make things jiggle. Hey, when you obsess over braless boobs, you know these things.

Today’s video is short, just 1:30. And although there are several models, trust me we really want to focus on the first one out of the gate.

This tall redhead is skinny but was blessedly born with some grrreat jugs.

As soon as she comes out of the backstage area, even though she’s pretty far away from the camera, you can see those hooters wiggling. We thankfully get a couple of different camera angles, and plenty of time to watch the mesmerizing motion.

As she gets a little closer, I can’t help but notice her crotch. That green bikini bottom is sucked up so tight to her labia it is threatening to cut the circulation off. Let ’em breathe, that’s what I say. Fling those bottom off and let your labia flap around too.

It sucks that due to her cover-up, we don’t get a good glimpse of her butt on the way back down the catwalk. But if you watch the rest of the video, you’ll see that the next gal has a butt tight enough to bounce a quarter off of.

None of the other models are as well-endowed or jiggly as the first lil’ mamma, but I wouldn’t kick them out of bed.

I had to dig around a bit to find some other interesting redheads for ya. Suspenders from 2012. And you might as well check out the braless Canadians.

And if you’re bored, braless poetry?

I searched high and low and realized I thus far have only covered swimmer pokies, not diving pokies.

I guess the sports pokies category in general has been a little under-represented the last few years. With the exception of golf. Damn, Grace Charis keeps blowing up the BralessBlog website, probably because she is the hottest, sluttiest little club swinger the golf world has ever seen. Paige is no slouch (and honestly looks hotter), but she doesn’t pull of the naughty girl vibe the way Grace does.

Back to diving, I thought this picture was pretty epic. I kind of think this girl is praying just before her competition. Something along the lines of:

Dear God,
Please help me execute my triple-gainer, half-twist, earsplat without spanking my beaver on the water so hard that it creates a disqualifying tidal wave.
I have yanked my college-issued blue swimsuit so far into my coochie specifically to try and avoid this performance issue. Gotta keep them labia hugged up tight, Lord.
I yes, I apologize about my prolific pokies. I realize this isn’t really the Christian way to jump in the water, but God I’m cold and we all know my areolae are going to react. It’s just biology.
Well, okay, I guess ya know a lie when you hear one. I secretly pinched my nipples back when I was climbing the high dive ladder because that one male judge can’t stop staring at my headlights, and I’m hoping he gives me a perfect score.
Um, also, sorry about that sloppy hummer I gave coach on the bus. I was just paying him back for the extra diving lessons he bought me.
Love, Edith 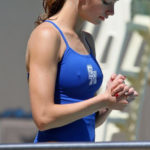 Okay, stop what you’re doing. Stop it right now, and watch this video:

She starts out in that green tank top that’s held together with butterfly chains. Every time she makes a point or insists that you subscribe, those big natural boobs jiggle. That green material is impossibly thin. You can see every little bump and ridge on her nipples!

At 1:00 she jumps into the brown dress, and I swear on an Oreo’s life there are boobquakes when she prances around modeling without a bra. Her boobs hang pretty low and droopy, but we ain’t caring. She sneezes at 1:58, and it made my pants tight.

At 2:10 she’s in the red dress. I’d like to say skip this one, but her hooters are massive and if you’re like me you’re not going to skip a single second of this. She does this bouncy walk at 2:53 and I’m surprised those girls didn’t spring up and give her a black eye.

Little tiny animal print dress at 3:20 and you haven’t seen milky white braless boobs like these since your busty aunt gave you a hug after church when you were 8. Intentional bouncing at 4:08 causes my heavy breathing.

White dress at 4:50 is see-though, requiring her to hide her nipples. Boo.

Purple tanktop dress at 5:55. Oh. My. God. I’m in love. I just can’t get enough of the way her boobs jiggle. And her boobs have that telescopic shape I deeply appreciate.

The sextoy industry has grown enormously in the last 10 years. There are lots of reasons for this…

1) Availability
The ability to order online means that you no longer have to find a local store (that sells sextoys) and walk in there between the hours of 8a and 5p.

2) Privacy
The internet also allows folks who wouldn’t normally be bold enough to go to an adult novelty store or go through a checkout lane with a perverted purchase to do so discreetly, with nobody the wiser.

3) Technology
There is some really cool stuff that has come out, from bluetooth remote access to virtual reality to artificial intelligence hummers!

It’s interesting how sometimes toys or technology developed for guys transfers over to females, or vice versa.

I have recently become a fan of grinding toys. 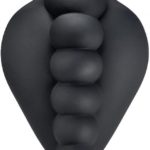 My girlfriend introduced one to our bedroom a few months ago. She flopped it onto the bed and used it while I watched. The grinding device she was using was called a Honeybunch, but that’s not the point.

I ain’t afraid to admit I like my taint played with. The “cock ring plus one” that I showed you in #10 in this post might have been my coming out party. Lots of straight guys who like boobs and drool over women like their butts played with. 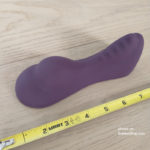 So one thing led to another, and I tried a grinding toy called the “rocks off”. It was quite enjoyable, and led to a rather explosive ending.

It’s not penetrative, it’s just meant to rub and grind on. It has a rounded bulge on one side of the groove, and a ridged fin on the other side. 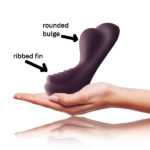 Although there are plenty of ways to skin this cat, after a bit of experimentation, I found the following set-up to be ideal:
1. I put the toy on a firm pillow.
2. I put the pillow right in front of my girlfriend with her legs spread.
3. I pour copious amounts of water-based lube on the toy.
4. I straddle the pillow and toy, with the round bulge on my taint and the ribbed fin on my butthole.
5. I grind on the toy while I’m penetrating my girlfriend. 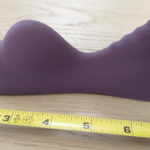 It’s made out of silicone, which is a premium material that is easy to clean (quite necessary once I get through with it, trust me), and body safe with no crazy chemicals that can leach into my nether-regions.

Wow, let me tell you, this thing is incredible. Did I mention both sections vibrate, and can be controlled independently? Ohhh yeahhhhh.

Now look, I don’t always want something jammed between my buttcheeks or tickling my taint. I don’t roll this thing out of the sextoy drawer every single time. But it’s there when I want it, and I’m loving it.