Alyssa Milano Shops for a Bra

It would be a real shame if Alyssa Milano actually found a bra she liked, and bought it, and put it on. Cuz then we wouldn’t be able to gape at her here on bralessblog. Whaddya think, are those c-cups? I mean, clearly, they are all natural, no fake stuff here – not that there’s anything wrong with that. I started to comment on Alyssa’s new big mamma boobies and big mamma belly, but then I realized she’s not pregnant. I was thinking of Jennifer Love Hewitt. It’s really not that easy to get the two confused, they look nothing alike. I’m just stupid.

Do you remember that Greek mythology guy Achilles? He was a bronzed war-god (much like myself), with impeccable good looks and incredibly sophisticated tastes and he drove a Porsche 911. Well, actually he was a war god or something. Anyway, his fatal flaw was some kind of little spot on his heel where if an ant bit him he would shrivel up and die. Lots of people (not me) have a fatal flaw. With J-Love, it’s those damn kankles. With Alyssa, it’s those hairy-ass forearms. I’m assuming she tends to be hairy all over, but has the sense to get her upper lip waxed. Doesn’t really matter. She is still magnifique.

Alyssa occasionally gets naked and humps people for our viewing pleasure. 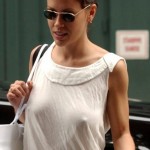 This entry was posted in Braless Alyssa Milano. Bookmark the permalink.