Well, you are probably willing to share a cup with Annalynne Mccord. She has gone from television, to movies, and back to television. Who can keep up with it all, except to say wow she is hot enough to melt tritium. In these photos, she is stomping along some sidewalk in probably 8″ heels, and she is wearing a deep plunging neckline on her fancy little blouse t-shirt and whaddya know, she has forgotten her bra. I wouldn’t say this is unusual, after all I didn’t know who the heck Annalynne Mccord was until about 30 seconds ago. But I would say she has some deeeeeelish pokies and I would be happy to bury my face in them.

In the first pic, she seems to be waving hello to the camera, as if saying “Don’t mind me in my shabby-sheik, super-thin t-shirt, with my rowdy nipples poking through, and my skinny thighs going swish-swish in these skin-tight black leggings. If you prefer, you can just look over here to the right, that would be my left folks, and check out my non-Caucasian but english-speaking assistant who likes to wear olive green tanktops with bras so tight they threaten to squash her boobies up so tight they give her breast cancer. Also, standby until the wind ruffles the hem of my t-shirt up enough to uncover this ungodly camel-toe I’ve been working on for the last one hundred yards. Thanks now!” 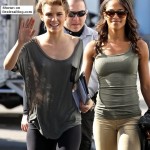 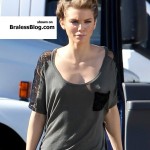 Sometimes Annalynne wears her hear super curly, which reminds me of Keri Russell. We took a gigantic break between June and July last year because, well, life intervened. Not only did we not post about beautiful vamps like Annalynne, we didn’t post about anybody. But we did bracket the break with a post in May about oldie but goodie Sharon Stone, and then in August with LeeLee Sobieski. Anyway, count your lucky starts that we’re here, virile, and posting all summah!