At the risk of beating myself up, which is something rarely seen unless you are watching Tyler Durden do it in Fight Club, I will graciously admit that it’s been awhile since we posted about any tennis pokies. I kind of like them. About the only thing better than watching some sweaty grunting woman dash around a tennis court with her nipples poking out, is watching a similar woman doing it on a volleyball court. Or maybe a gymnastics chick. So anyway, it’s hard to not like Caroline Wozniacki. She is pretty well-endowed, and she tries pretty hard. She wears low-cut tops, generally her nipples get erect when she gets wet and sweaty, and sometimes she wins. That last part doesn’t really matter very much, but truth be told it’s slightly more exciting to ogle a winner than a loser.

It’s a little crazy how a lot of the network stations zoom in and use various angles trying to reduce or eliminate their coverage of tennis pokies. You would think they would realize this like a goldmine. Women are not going to *not* watch women’s tennis just because some nipples bounce by. And guys will most definitely tune in for that specific reason. So if they are smart, they will start showing it more often, and their viewership rates will soar and their sponsors will profit, and they will have more tournaments, and the girls will realize things go better with a little flash and flesh, and bam we get some momentum. 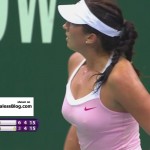 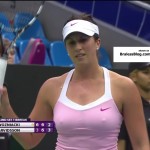 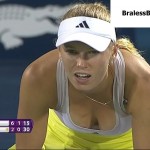 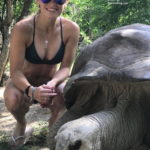 This is not really the turtle head that I was hoping Caroline would lean down beside. Can anybody tell me what that key that is dangling between her breasts on the necklace means? The key to her cleavage perhaps? Any time she wants to wear a bikini, she should feel free to do so. Not to be morbid, but is that a scar on her knee? Maybe a recent surgery? Tennis can be hard on the joints, even for cute little blondes. 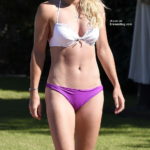 A bit of cameltoe here, with of course another bikini. Her abs look flat as a washboard. If you burned 8k calories per day playing tennis, yours would look that way too. The grimace, and the goofy shades, and the fivehead I could do without. But dang, it’s the Woz and I will forgive her some dirty, not-showered time. The voyeur-ish cameltoe shots of celebs always turn me on, only slightly less than pokie action.

I’m posting up a few new shots of Caroline, because why not. She tends to get a little sweaty and those pokies start to reveal themselves. Now you may notice in one of these shots where she’s wearing a bikini that there is a conspicuous absence of boobage. It’s not that her boobs are missing, it’s just that we don’t see nips. So what gives? Well, dear readers, I posted that because holy shizzle her vadge is about to burst out of those bikini bottoms. I’m an equal opportunity perv, and when I get a chance to see the intimate details of Caroline Wozniacki’s pudenda you bet I’m going to share. 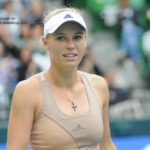 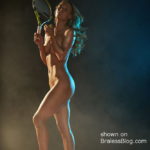 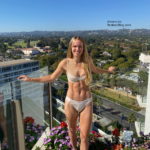 This entry was posted in Tennis Pokies. Bookmark the permalink.