Halle Berry and the Braless Standard

Despite her advancing age, Halle Berry continues to set a new standard for bralessness. I think these shots are from her outing on Jay Leno. How my man Leno could even function with Halle’s perky natties sloshing around right there in front of him is beyond me. Her legs aren’t exactly shameful either. It would be pretty much an honor to go down between her thighs and look up and see her cute little pixed O-face looking down at you between those C or maybe D cups. These photos were like 4,000 pixels high, definitely large enough that you voracious bozos would’ve blown my server up like piranhas picking a zebra carcass clean. So I shrunk them down, but I’m still wide-eyed and miserable just looking at that yummy cleavage. 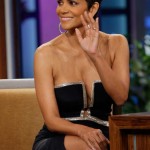 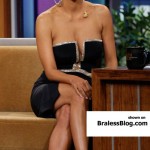 These may have been my favorite shots of Halle so far.
Halle Berry Sags
There is that one movie where she went topless, and that other movie where she got nakkie with Billy Bob Thorton of all people, but the tease is always better than the reveal. At least until she jumps my bones on the couch while the 11:30 news is on and I get a headache from spooging so hard. Is that what’s on the lampshade? Yuck, that will probably never come out.

This entry was posted in Braless Celebrities, Braless D-Cups. Bookmark the permalink.