After twelve long months of not looking at Maria Menounos’s wet bikini boobs (and, to be perfectly honest, her critchety crotch too), I am having withdrawal pains. Well, not totally true. I was staring at her boobs during Dancing With the Stars. Those are probably C-cups. I would like to give them the PALM test to be sure, but probably all-natural C-cups. You’ll have to excuse her gigantic mane of hair that makes her look like some kind of horny, smiling tigress. I’ve seen her look much hotter, but dang when those boobs are on display you gotta stop and smell the roses.

You gotta admit, she looks pretty elegant, if you just ignore the hair. She probably smells good too. All stilted up on those heels. They would stay on, oh my yes I would have her keep those heels on when I ripped that zillion dollar dress off her and dove right in. I generally like babes with blue eyes, well shoot I just like babes period, but with Maria’s brown eyes she has this wounded doe who is sexy and about to scream while she cums look. If I’m really lucky, she will stumble across this post one day on the interwebz and realize I am the one for her and she will contact my agent about getting me in touch with her. 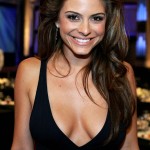 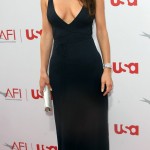 I wanted to add in some more snaps of Maria doing her boobie thing in a dress. You don’t mind do you? Haha.

She appears to be climbing out of some kind of exotic car for a party or a red carpet event here. You can see her ticket in her hand, and her little purse, and her overcoat. Thank god she’s not wearing that jacket, because the way she’s standing there we can very clearly see her boobs pushed together in the soft daylight, beckoning for us to motorboat them. 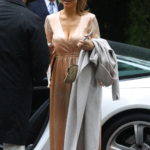 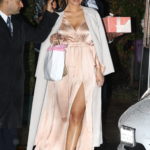 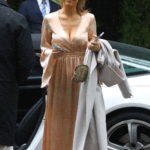