Yep, dig down deep into your primal self – where you grunt, and fart, and rub your dong on things. The caveman in you is dormant, but can expose himself in oh so many ways.

You can help it. Don’t claim you can’t. Much like a dog can be trained not to lick his butt, you my dear friend can resist some of your more primal urges.

What’s a primal urge, you ask? Let’s go over a few:

All of those are interesting enough to talk about, but since it is BralessBlog, I’ll restrict myself to just the boob thing. Furthermore, I’ll scope that down just to downblouse peeks.

For the purposes of our discussion, we’ll define downblouse.

This is when you end up looking down a lady’s shirt. It could be because she’s bending over scratching her toenail. Maybe she’s signing a form on the desk in front of you. Maybe she’s climbing out of a car or petting a dog. In some cases, she doesn’t even have to be bending over; she could just be wearing a low-cut top, and you’re a tall pervert.

There’s a voyeuristic element to this. Everybody likes a good flash, but if she’s intentionally showing you her cleavage, it doesn’t carry the same thrill as seeing something you really weren’t meant to see.

And speaking of cleavage, how much you see really isn’t a critical factor in the level of pleasure you get. We already know that looking at boobs reduces blood pressure in guys. Well, the study was done on guys, I suspect it also lowers blood pressure in women. Boobs are magical in that way. We may get an extra little jolt of sexual yuminess if we catch sight of a nipple, but you can compare this to fishing. Those who fish have fun fishing, regardless of how much they catch. And you are looking down some girl’s shirt because it’s in your DNA, regardless of whether you actually see nipple.

I am unaplogetic about this. If I don’t want it to rain in my (shitty rusty Yugo) car, I roll the windows up. If women don’t want you looking down their shirt, they should pay freaking attention and not flash their boobs around.

Guys do look at women. We are visual. Boobs are yummy. If they provide the opportunity, we are going to scope things out. This should not be a shocking, surprising news flash.

I may try to turn comments on for this post. I would be interested in hearing some of your downblouse stories. A-holes typically spam the shit out of me, which is why I ususally keep comments turned off.

She loved dogs, and she always made it a point to come over and pet whatever dog I was walking. She would baby-talk it and scratch it behind the ear and rub it vigorously on the rump. Meanwhile, she was often wearing a low-cut, loose-fitting shirt, sometimes with or without a bra. With her bent over like that addressing fido, I invariably got the most crazy downblouse view ever. Even with a bra, her boobs would jiggle back and forth and half the time I could see all the way down to her belly-button.

Knowing what was coming, and quite frankly hoping and praying for it, I would frequently prepare myself before I got to her house. Be polite. Ask her how her day is going. Be friendly and warm and try to seem normal. But invariably, I would get to looking down her shirt, and the caveman in me would take over, and I was basically not capable of speech.

Even from a young age, my downblouse instincts were strong. I should’ve had downblouse jedi training!

I like those photos too, cause I’m a perv. But I’m challenging myself to find non-nude downblouses like: 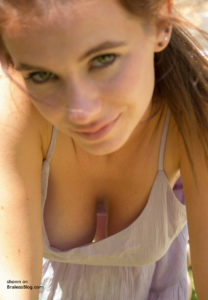 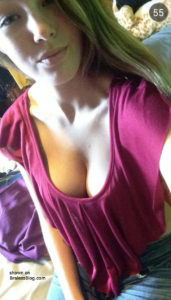 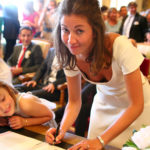 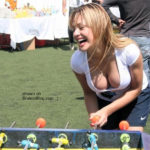 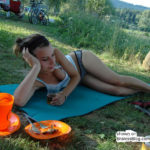 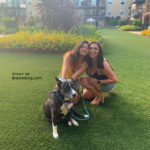 Let’s take a deep breath of rare air. Ahhh, feel how that cleans the lungs, clears the phlegm? Want to know what’s super-rare in the world of downblouse creeper shots? The dual downblouse.

When I stumble across a candid shot of not one but two girls where we can see down their tops, I know it’s like striking the lottery. Like a boob lottery? It makes my over-taxed and enlarged heart go pitter-patter. This first shot certainly qualifies. I don’t think these gals are purposesly letting us look down their shirt at their cleavage, they just decided to pose with the dog and they happen to have great boobs.

And then, folks, we have the rarest of the rare. This like stumbling across a four-dollar bill. You didn’t even know it existed, right? Here we have a dual vintage downblouse. Bam, drop the mic. Let it be said that I have stepped up the game here on BralessBlog so much that it’s like inconceivable that you could get this kind of awesomeness anywhere else.

This entry was posted in Braless Women, Downblouse Boobs. Bookmark the permalink.