I keep finding miscellaneous Jennifer Lawrence content all over the damn site. It’s like finding little bread crumbs leading to snacks left in the woods.

Her boobs are soooo nice. When she’s not busy pushing them up with some constrictive dress or bustier, she tends to let them bounce around braless. And yes, they look a lot smaller when she does that. You know what that means??

It means they are soft. Like really, really soft. And squishable. 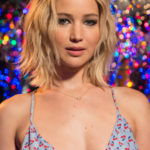 J Lo probably has the realest boobs on the planet right now. Except for mine, but mine are manboobs and that doesn’t count.

She’s a bit of an odd bird. She gripes and preaches when her cell phone gets hacked and her boobie pics get tossed around the interwebz, but then she goes and poses topless for Esquire and flops those girls around in nothing but bodypaint in that one mutant movie.

Can’t explain that. Don’t need to. I like her eyes. Oh, and her… boobs.

And lawd-help-me, her personality. She’s got that dorky gal personality where she trips and falls and accidentally stuffs your johnson in her mouth. I, err, whoops, that last part just popped out. Excuse me for getting mixed up. So anyway, she is rich beyond belief, and probably if I think about it I’m guessing she’s kind of bored. She’s conquered part of the world. She hasn’t caught cancer or gotten busted with nose candy in her purse. She’s probably looking for the next big thing. 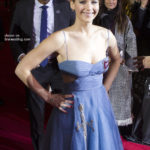 Which will probably be a BralessBlog interview. Yep, that’s just what she needs. I’ll sit her down on my couch, after brushing some of the at turds and cheetoes off of there and oh what about that scratchy little white stain well I’ll just flip the cushion over there now, and then I’ll get her giggling at some witting comment and she’ll bare her soul. She will almost certainly do the interview braless, and I might even convince her to slip her panties off and put them in the freezer before she sits down. Not sure why I said freezer, but the last time I put some panties in the microwave I forgot about ’em and caught that shit on fire.

If you want to see a slightly more revealing side of Jennifer, I mean in advance of our riveting (imaginary) interview, ya might want to try HERE 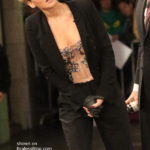 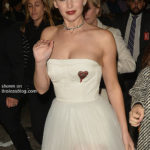 Some yummy downblouse photos of Jennifer while she is signing autographs: 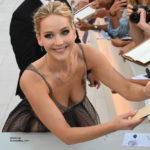 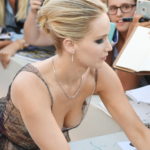 Here she is out for a night on the town, with no bra 🙂 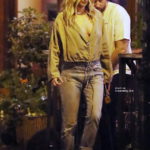 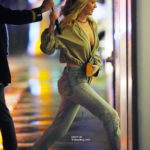 This entry was posted in Jennifer Lawrence Braless. Bookmark the permalink.