The Holy Grail – Yep She Has It All

Holy mackerel. I have stumbled upon the holy grail.

I know, I know – I profess my undying love for chicks on this website constantly. But seriously, this is THE ONE.

The perfect photo:
gotta have some cleavage
gotta have pokies – we want those nips
candid is pretty awesome – if she doesn’t know we’re looking it give a bit of an extra thrill
what the heck, while we’re dreaming let’s say there’s a cameltoe

Whoa, what was that? Cameltoe you say? Have I lost my mind? As a boobie specialist, bralessblog obviously doesn’t delve into the world of the mooseknuckle very often. But it’s quite titillating and fun to check out. We’ve touched on it before…
There’s a brief mention about the chick in the red swimsuit.
And also, it’s hard to miss the pudenda riot going on in this lady’s pants.

It’s just damn rare to come across a photo where it has everything at once. It’s the bralessblog holy grail. The new trifecta – hotness, pokies, and cameltoe. I’m gonna print some decals for this soon, and we’ll see them on minivans all over America.

I should go ahead and give you guys the juice: 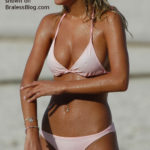 There, see what I was moaning about?? She is gorgeous, but not super-model unapproachable. I mean, anybody is approachable when you are a stud-muffin such as myself. Rico Suave, yo. But she’s sort of grimacing off into the distance thinking “Damn, it’s hot. That dip in the ocean hasn’t helped, in fact my ass sweat has reached defcon 9, aka high alert. I wonder if anybody is going to notice that this wet, sweaty bikini is so adhered to my crotch that the dude sitting on the Star Wars towel way over there can count the wrinkles in my lips? And dang, my nipples, which were previously hidden, have suddenly popped up and made an appearance.”

Bravo. That’s what I say. Thank you, beach goddess, for serving as our Holy Grail. Everything we want, everything we need, juxtaposed into just one photo. We’ve waited, not very patiently I might add, for you to come along. Here you are, and we bow down. We salute your absurd hotness, and your undeniable wardrobe malfunctions. We can only hope you remain hot for several years, and also let your husband take photos of you wearing that negligee he bought you for Christmas, and then he posts them on the web where we can find them.

Shoot, while we’re hoping, we’ll hope that you’re a freak like us, and will willingly show off that body from now until the end of time. Hey errbody, check out my mogambos, want to watch me shake and jiggle?

Hold on. I found another one.

In the depths of my hard drive, the very bowels of ickiness, I found another “holy grail” shot.

It almost looks like this is some kind of sports bra ad. Professionally shot for a certain underwear brand? But surely they would not publish a photo of this chick with her hooha lips bulging out like that. “Excuse me, dear? The pokies are fine, they are great in fact. Dudes love pokies, and our research shows women can’t actually stop looking once they see them. We use these in ads all the time, at least in Europe. But, ah, the cameltoe? That’s kind of a problem. Do you think you could, I don’t know, kind of tape those things down? Yes, this it duct tape, but honey everybody does it. And yes, you’re right, it will hurt when you pull it off. But jeez, look at your crotch. The FCC is liable to throw us in prison. Have you birthed a baby lately? Not trying to be rude it’s just… you look sort of swollen down there. Ok, enough, I’m sorry. Just cover your action up and give us a break.” 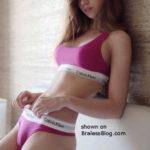 This entry was posted in Bikini Pokies. Bookmark the permalink.