A Mess in a Dress

We are getting a little bit closer to that time of year when people get invited to more cocktail parties and holiday get togethers.

The bad news is, I’m a weirdo and it’s hard for me to socialize in such a setting. The good news is, there always seem to be ssssmoking hot chicks at these types of parties. When you sit around in a dingy, cheeto-stained t-shirt and droopy underwear in your mobile home all the time, going to a fancy party means you actually meet real live people.

Some of the dresses these days, holy cow. I’ll tell ya, when I was younger, phones had rotary dials, the TV only got three channels (even with tin foil on the rabbit ears), and women covered their boobs when they went out in public. Nowadays, damn near anything goes.

I don’t want to sound like a broken record – I realize it was only a year ago when I got all jiggy-with-it on some tight dress mammas. But this is an epidemic that deserves our attention. Or whatever the word for epidemic is that means hot women taking their bra off and letting their boobies jiggle around in cocktail dresses.

This little hunny looks like she might have starved herself for 6 weeks to squeeze into this dress. I’ll admit it ain’t usually the skinny ones we like here on BBlog. But really it’s just her legs that are spidered-out, she appears to have curves in other important locations. That includes her chest, which appears to have been inflated by the finest silicone money can buy. Ya gotta love the fiesty, hand on the hip, head tilt, grin right? Yep, I bet she clomps around her party with this crazy stilt shoes on and every dude in the place is secretly hoping that dress gaps open just enough that he can catch a glimpse of some nip. 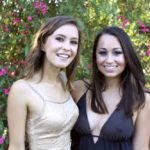 Speaking of nips, one can only wonder what this dark-haired beauty was thinking when she left the house. Did she imagine that nobody would stare at her oh-so-exposed nipples? Wow, I’m here to tell ya, with a face like that and a body to match, she could smell like donkey dung and be broke as a pauper and she will still have dudes swooning all over her at a party. I bet her friend is thinking “Oh my god. Becky’s nipples are totally poking out. Like, totally. If they were any more prominent they would actually rip through the cups of her dress. Is there some kind of surgery I can get that will make mine that noticeable?” 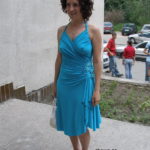 This little hottie is clearly headed to a wedding rather than a party. I can just tell. Nobody is gonna go party wearing a dress with a sash at the waist and those frumpy shoes. And her hair, geez. Not to take your attention away from her delicious pokies for even an instant, but WTF re: hair. It looks like a dead mangy dog wrapped itself around her noggin. Maybe she rode to the wedding ceremony in a convertible?

She looks like the type that would have a couple of drinks and before you know it, she would be flipping that skirt up and doo-wopping all over the damn place.

Annnd then there’s this total insanity. C’mon folks, how can you explain this? Who wears a white dress, packs it fool of boobage, and then hops up and down (possibly in a room-sized freezer?) or whatever in pursuit of the world’s rock-hardest, retina-threatening pokies? Maybe she didn’t intentionally perk them up, maybe she just has perma-pokies like Jen. Regardless, it’s like a flashing neon sign that says: JUST LOOK AT MY BOOBIES AND NOTHING ELSE!! To be considered a real hipster thought, she needs to get some kind of el-cheapo pendant around her neck that will dangle just between her girls. She doesn’t really have the cleavage for it – too much separation – but that’s just going to be how the ball bounces when there is this little support.

Sometimes we get suuuuper perverted and we look down people’s dresses. Can’t help it, cause hairy man.

The other day I went to the dentist. I do this every ten years, whether I need to or not. I figure once the rest of my teeth rot and fall out, I won’t have to worry about it any more. Until then, bam, like clockwork, ten years. Anywho, there was this sexy hunny who had clearly interrupted her work day and come straight to the dentist from her office. She was was wearing a mostly demure dress, nothing like what we see in these photos. Only thing was, it was a tad low cut.

After perusing the car magazines and doing my best not to slobber or stare at her ample bosoms, I got called back and the dentist worked his tragic magic. Then when the nurse-lady was leading me out, she stopped me at the front desk and they were trying to get me to pay for something. I don’t have any idears what that was all ’bout, cause don’t errrbody know I ain’t gots no money.

Cool fact, my mostly-demure hunny was finishing up her dentist appointment at the same time, and I was diggin’ that fancy dress she was wearing. Just when I was about to leave and ride public transportation back to my trailer park, this gal leaned over the desk to sign a form. Praise the LAWD, you can bet I got an eyeful. Her boobies were pasty white, and she had a demi-cup bra on so there was plenty to see. They were clapped together, like good cleavages are supposed to be, and it really made my heart go thump-thump.

I think there are two things women wear that are my favorite: yoga pants, and dresses. Well, also bikinis. And tanktops. Whelp, whatever, I like women, pretty much whatever they wear, but especially when they have a bit of perfume on and they are wrapped up in a bit of a dress.

As you’ve probably noticed before, I enjoy a good dangle.

This entry was posted in Braless Amateurs. Bookmark the permalink.