Ivanka Trumps Nipples are a Little Much

Someone wrote me the other day and asked me why I’m so fascinated by Ivanka Trump.

Well, I’m not. I searched the site, and realized I’ve posted about maybe a little too much. And sometimes I dream about motorboating her boobies while I’m working at the gas station. And also one time I paid $59 for a pair of her panties on ebay, and although I was really, really hopeful, in retrospect I guess I got scammed. So anyway.

Last week Ivanka paraded around at the United Nations meeting in the blue top with her nipples poking out. Just straight up nipple pokage. Who knows what the hell she was thinking.

All the world leaders, and all their flunkies, were probably walking around whispering behind their hands “Have you seen Ivanka’s areolae? Did she forget an article of clothing?”

No, she didn’t. She was certainly wearing a bra. But it was damn cold in there, and freaking Ivanka refused to put a blazer on or stick an extra pad down her bra cup to hide those crazily erect nipples.

This is kind of asinine. No, no – I don’t want to make you think I’ve gone weak. Suddenly caught morals. Cleaning up my act and holding women accountable for keeping their cleavage displays to a minimum. It’s nothing like that. It’s just that her daddy is president. And people were actually trying to get shit done there at the UN. And she should have more sense than to make the topic of the day all about her pokies. 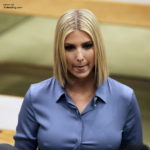 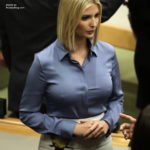 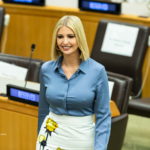 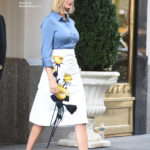 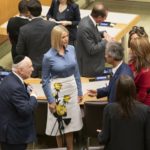