This photo makes me shiver, and froth at the mouth, and pound on the table, and howl at the moon.

I think we should break this down in detail, don’t you? The cool thing is, it’s my damn website, and I can do whatever I want. So let’s treat this more like a notification rather than a request for approval.

1) She’s a cutie
Her face is quite attractive. See those semi-nerdy glasses? I like ’em. See the hair in a messy-bun? I like it. Lips, ears, eyelashes. It all works for me. 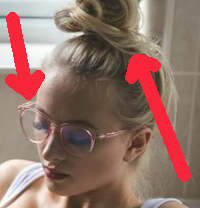 2) OMG her boobs
You had to know this was coming right? Cause here on BralessBlog, I tend to focus on the chesticles a lot. Some would say I’m a wee bit obsessed.

Also, pokies. As in nipples that are crazy hard, and fully detailed, and ready for me to pinch. I want to feel those on my eyelids and my cheeks and my nose rightaway. Yes, I’m creepy. Get over it. 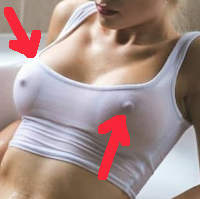 3) Abs
I do not require flat abs. I like curvy women. If you don’t have a six-pack, I’m cool with that. Well this baby girl clearly takes her modeling career seriously, and drinks less hop-infused life water than I do, and cuts her doughnut consumption off at 1 instead of 1-dozen like I do. Awesome tummy. Two thumbs and a johnson up from me.

4) Leg-spreading !BOOM!
As I’ve mentioned before in a few of my crotch posts, it’s hard for me to ignore a lady with her legs spread. And it’s hard for you to do that too, whoever you are. Even if you are a women, which statistically speaking is less likely.

She is spreading her legs nice and wide, which totally forces me to look at her crotch and notice that her panties are tiny. The way the water just barely covers her privates is maddening yet wonderful at the same time. Oh so well done.

If you’ve been waiting for it, here’s the full-resolution image. Enjoy. 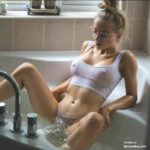 This entry was posted in Braless Tanktops. Bookmark the permalink.