I know many of you think I am brilliant and omniscient. All of which is very, very true. However, some of the infinite number of little factoids that are stored in my brain don’t like to come out. They are all comfortable in there all nestled in the synapses, and short of some type of hallucinatory drug, they don’t intend to migrate down to my medulla oblongata, which is the area of my oversized brain that sends incredibly sensible and witty messages to my fingers to type. This is a roundabout way of saying I had no idea who Micaela Schaefer is, I had to go look her up.

She is German, and she does entertainment stuff. You know, fashion model, DJ, singer, actress, that kind of gig. Now I’m not one to go gaga over fluorescent pink lipstick, but as you already know sideboobs kick me into high gear. What the hell is Micaela wearing? Is that 8mm videotape? And who put it on her? And how much did that guy pay for the priveledge? Anyway, sideboob isn’t even an issue when you have big c-cup melons and you have nothing but a few strips of tape covering them.

I would be in real trouble if I were in the audience or standing on the street when she walked by in that getup. Because I would spooge in my pants and fall down comatose. I can just barely catch a hint of some kind of crazy sexy underwear underneath that skirt, which is kind of disappointing but at the same time turns my hormone cooker up from high to laser hot about to blow up high. Ignore the geeky rubber watch, and assume it means she’s quirky and won’t mind boffing in unusual places/positions. 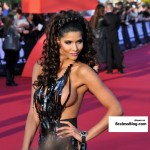 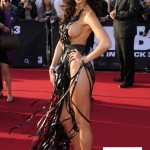 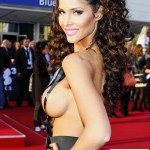 This entry was posted in Braless C-Cups, Braless Celebrities. Bookmark the permalink.