Crazy Sideboob and Some February Updates

I added a little sauce to the latest Lisa Rinna post.

I fixed the video and added a yummy photo to the Alexandra Daddario post.

I found the equivalent of a rare coin at the bottom of a coal mine, and posted a few photos of Hillary Duff’s pokies. And a video, for extra fun.

Do you guys know what a Narwhal is? It’s kind of like a unicorn, except it’s a whale. No, I’m not making this up. They are about as rare as a unicorn, but not quite since they are real. 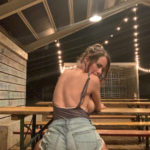 Well, this photo is like a Narwhal. Really, really dang rare.

Explain to me how a woman can even bang out a sideboob this awesome *from the rear*?? I know some of your are going to protest that she appears to be wearing a bra, thus presenting quite a conundrum for the “bralessblog” topic in general. But ya’ll just need to hush up, and conceded the fact that when that much of a boob is hanging out the side, the presence or absence of a bra is of little consequence.

Further rarifying this shot, vaulting it into the upper echelons of my favorites in the sideboob category, is that wonderful peach of an ass the mamma is rocking. Those cutoff shorts are mighty short, and they are cleaving her buttcheeks in a way that makes me spasm in my tightie whities.

I don’t know what exactly I would do with this lady if I happened upon her sitting at her picnic table. Given that she’s probably there to eat dinner, I would probably go fetch her bar-b-q plate and then stumble on the way back and fall down like a geek and hope that she came to nurse me and my bruised knee back to health. But I should cut this little daydream off there, before I admit additional things that would actually embarrass me.

This entry was posted in Sideboob. Bookmark the permalink.